The Philippine Institute of Volcanology and Seismology (Phivolcs) has issued a certificate indicating that Lumiere Residences is located approximately 25 meters west of the nearest segment of the West Valley Fault line (FC-Aug-11-239). The project site is well beyond Phivolcs’ recommended buffer zone of at least 5 meters on both sides of the fault trace and clear of the mandatory 5 meter easement on both sides of the fault line by the Implementing Rules and Regulations of Presidential Decree 957: The Subdivision & Condominium Buyers Protective Decree.

Based on the soil investigation undertaken by Astec Materials Testing Corporation on Novenber 2012, Lumiere Residences sits on the Guadalupe Plateau that is known to be underlain by Guadalupe Tuff Formation, often referred to as ‘adobe’. This type of soil is considered to be the most suitable soil for building construction.

Lumiere Residences has been issued an Environment Compliance Certificate (ECC-NCR-1301-0006) by The Department of Environment and Natural Resources (DENR) last February 2013. 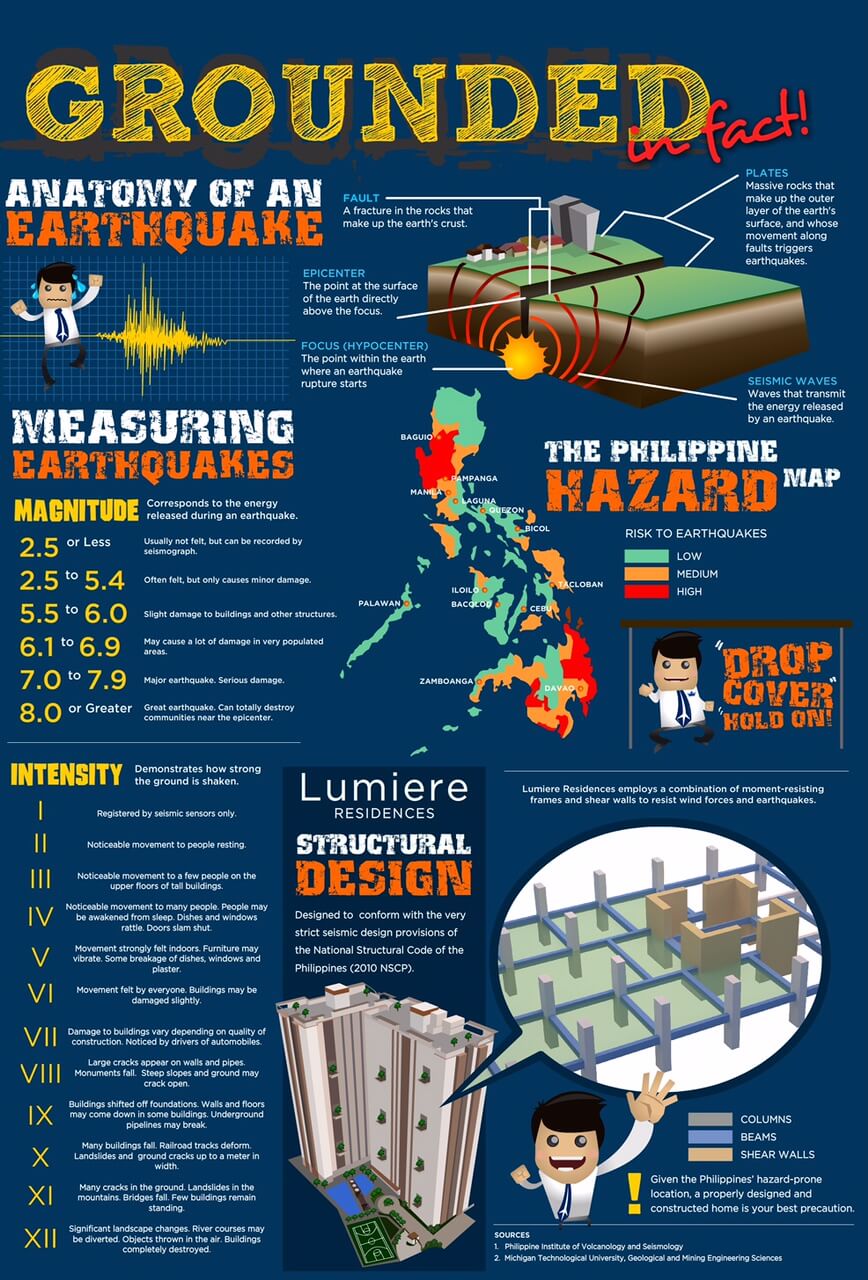 DMCI Homes commissioned the expertise of a structural design firm, Macro Consulting Structural Engineers, Co. A seasoned team of civil and structural engineering experts who have worked beside and were mentored by the masters and principals of leading design consultancy firms in the country. The company has a portfolio spanning from the Middle East to Asia, from hotels, high-rise residential buildings and mixed-use developments to international airports. As a Philippine-based structural design firm, Macro Consulting Structural Engineers, Co. is adept in designing buildings that meet the structural performance requirements for earthquake prone zones.

Lumiere Residences is designed to resist lateral forces, wind and earthquake by using dual system: a combination of moment resisting frames and shear walls or braced frames is designed and capable to resist lateral forces caused by wind and seismic load. It also provides ductile behavior to the building’s stability. The building’s structural design is compliant with the revised Implementing Rules and Regulations of the National Building Code and National Structural Code of the Philippines’ (2010 NSCP).

Lumiere Residences is developed by DMCI Homes, the country’s leader in resort-inspired developments. The company traces its roots to D.M. Consunji, Inc. (DMCI) known as “Builder of Landmarks” and recognized for pioneering applications of advanced engineering technology in Philippine construction. DMCI has more than 60 years of expertise in the industry with a portfolio of commercial establishments, high-rise offices, residential condominiums and infrastructure projects that take up most of Makati Central Business District’s and Ortigas Central Business District’s skyline.

DMCI Homes, a main proponent of resort-style living in the Philippines, has been building high-rise projects, mid-rise condo communities, exclusive subdivisions, and leisure residences for more than a decade. The constant stream of projects provides an opportunity for the company to calibrate designs and methods. One of the company’s architectural innovations includes Lumiventt, from ‘lumen’ meaning light and ‘ventus’ meaning wind. With Lumiventt design technology, DMCI Homes shows its prodigious skills in engineering by designing buildings that breathe.

Kindly Fill Up the Form Below to Request A Quote :

Thank you for getting in touch!

We appreciate you contacting us. One of our In-House Property Consultants will get back in touch with you soon!

Have a great day!